While visiting family during the holidays of late 2008,
I received from the Lord, a dream of WW3 coming.

Then the train started to move through a forest and I was almost whacked off the train by a tree limb when I tried to look ahead too far to see where I was going, so I had to stay low, close to the dirt. As the train left the forest, it started to go up a mountain. The mountain became steeper and steeper. I became more and more worried that the train was going to derail and I was going to get hurt.

Finally, right as the train was almost at a 90 degree angle, I jumped off the train and right after, the train toppled. Immediately after jumping off the train, I looked up in the sky and saw a crazy amount of black planes fighting each other. It was chaos in the sky. Then I saw these military missile cannons from the ground shooting white flares up into the sky, trying to hit the planes. I woke up soon after this and immediately, God gave me the interpretation . 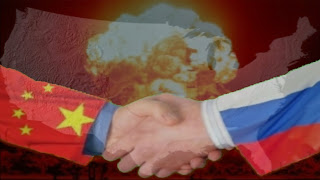 Here is the interpretation. The train is the U.S. I am in the last container of the train because we are in the very last days of the US as we know her. The dirt in the train I was laying on top of is American soil. Almost getting whacked off by the tree limbs would be me thrown off the train too soon, due to looking too far ahead and leaving the US too soon. The train going up the mountain represents the pride and rise of US hegemony as the world leader. As the train toppled, soon the US will also topple and when she does, WW3 will ensue. This was the war I was seeing on the toppled American soil.


God help us all to discern the signs so we know when to prepare and flee to safety.
Weatherbill
Home
Subscribe to: Posts (Atom)